Every 10 years, the United States Constitution and California’s State Constitution require federal, state and local district divisional boundary lines to be reviewed and redrawn, if necessary, to account for population growth and movement within the entire boundaries of the district. This process is known as Redistricting and is based on the results of the decennial US Census.

What is a district? When used in relation to administering an election, a “district,” includes any regional agency that has the power to tax, to regulate land use, or to condemn and purchase land that is governed by elected officials who have the authority to call an election. Examples may be the County of Santa Clara, the City of San Jose, the Campbell Union School District, the Santa Clara Valley Water District and regional agencies like the Bay Area Rapid Transit District (BART). Voters who reside within the legal limits, or boundaries, of the district or agency have the right to vote on candidates and measures the district has placed on the ballot.

When used in relation to administering redistricting, a “district” includes the subdivided smaller territories or divisions within the jurisdictional boundaries of the agency that will have an elected official who represents that smaller territory or division and who is elected by the voters living within that area. For example, the County of Santa Clara’s Board of Supervisors are divided into five divisions within the County from which they are elected (District’s one through five) and the City of San Jose has 10 divisions, or districts within the City from which the City Council are elected, and the San Jose Unified High School and Campbell Union School Districts have five divisions, called Trustee Areas, from which their school board members are elected.

You can find a list of the elected representatives in elective districts within Santa Clara County on our website under the “Candidates & Measures” pull down menu and selecting the List of Officeholders. You may look up your election districts and members by selecting, “Look Up Your District” under our Popular Services link on our home page.

The results of the redistricting process may change the congressional, state senate or assembly district or local supervisorial, city council or school district subdivision election contest(s) for your neighborhood. You may see different contests on your ballot than what you voted in the past.  Types of districts that can be affected by the census and redistricting process are:

Redistricting can also affect language assistance provided to certain who have limited English-speaking or reading skills. The following list reflects the different languages under the federal Voting Rights Act voters can request official voting materials and request assistance in the County of Santa Clara:

Under the California Elections Code, voters may request an exact copy of their voting materials and request assistance in the following languages:

Use the District Lookup to find your new district numbers.

Search the Statewide Database to find your new Congress, State Senate, Assembly, and Board of Equalization districts on the Final Certified Map. 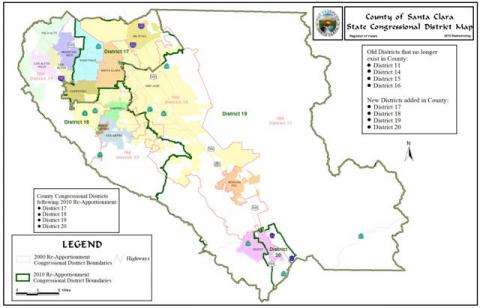 Did you know… Census data is also used to determine language services and access under the Voting Rights Act.

When does redistricting happen?

The redistricting process occurs every 10 years right after the results of the National Census population are finalized.

Redistricting is governed by the United States Code, Title 13, Chapter 5, Article XXI of California’s State Constitution, and Division 21 of the California Elections Code and portions of the California Government Code relating to municipalities.

What is the difference between redistricting and reapportionment?

Redistricting is the process to redraw existing district boundaries or set up new district representatives after the reapportionment process is complete. Reapportionment is the national governmental process of reassigning representation (elective seats) based on population growth and movement that is calculated after every census.

Why do lawmakers redraw district boundaries?

The US Constitution requires that each state to adjust the boundary lines of their congressional districts after each decennial census to accommodate for population shifts, so that each district has about the same population. California’s Constitution also requires the state and local legislative bodies to adjust boundaries within each state district (such as State Senate, State Assembly and State Board of Equalization), each supervisorial district within a county, each city council district within a city, and so on, if it’s boundaries are divided into territories. Taking the national census and redrawing voting districts based upon the population growth and movement every ten years is a way to have equal representation.

Who is responsible for redrawing district lines after the National Census?

Each state’s legislature will adjust (redraw) the boundary lines of the their congressional and state senatorial, assembly, and board of equalization districts. Locally, each elected body of the district is responsible for redrawing their own divisional boundary lines under the rules of California’s Election Code.  For example, the Santa Clara County Board of Supervisors is the legislative body legally responsible for adjusting the supervisorial districts of the County, a city’s Council is responsible for city boundary adjustment (such as the City of San Jose and the City of Santa Clara both whose council is elected by district), and so on.

California’s Election and Government codes also permit legislative bodies overseeing the district to form a redistricting commission that is independent of the legislative body, who will perform the review and adjustment of jurisdictional boundaries based on the census data (reapportionment of people). California voters authorized the creation of a Commission to draw new district lines when they passed the VOTERS FIRST Act (Act) in 2008. In 2010, the Congressional Voters FIRST Act added the responsibility of drawing Congressional districts to the Commission. The process is open to the public, and once complete, the commission will return their plans to the legislative body for approval. Currently, both the State of California and the County of Santa Clara use independent redistricting commissions to complete the redistricting process.

Where can I find information on the independent redistricting commissions?

Information on California’s 2021 Redistricting of the Congressional, State Board of Equalization, and State Assembly and Senatorial district boundaries can be found on We Draw the Lines.

The County of Santa Clara provides information about the 2021 Redistricting process on the County Executive Office’s website.

Is the process open to the public?

Yes.  Each legislative body is instructed by law to hold at least one public hearing on any proposal to redraw the divisional boundaries of its district(s) prior to voting to approve or defeat the proposal.

The Secretary of State’s website provides information on public engagement required under California’s Fair and Inclusive Redistricting for Municipalities and Political Subdivisions (FAIR MAPS Act of 2019).

Where are challenges to the redistricting process, if any, allowed?

Challenges are made in the state or county superior court, depending upon the type of jurisdiction (state or local). Challenges must be started within 30 days of the adoption of the new boundaries.

How do I know my districts and representatives?

You may look up your election districts and members by selecting, “Look Up Your District” under our Popular Services link on our home page. Based on the address you provide you will be shown a list of your election districts to select from and find out who the current members are. Until the Registrar of Voters receives and applies the data, the information you receive may reflect your former representatives. You may call our office to find out more information.

Does the result of the Census also affect what language assistance a county provides?

Yes. Section 203 of the Voting Rights Act uses the census data to review how language assistance is provided in state and local jurisdictions. The law covers areas where there are either more than 10,000, or more than 5%, citizens of voting age who are members of a single language minority group who cannot speak or read English very well. Historically, the languages covered under Section 203 are of Spanish, Asian, Native American and Alaskan Native groups. For more information on Section 203 of the Voting Rights Act, visit the Justice Department’s website.

Section 14201 of the California Elections Code, the county elections official shall provide facsimile (exact duplicate) copies of the official ballot to voters in precincts where the Secretary of State has determined that there is a need. This determination takes place no later than January 1 of each year the Governor is elected, and is based on the following:

When are the results of the Census released?

When does the Secretary of State notify the Registrar of Voters of any new facsimile ballot requirements?